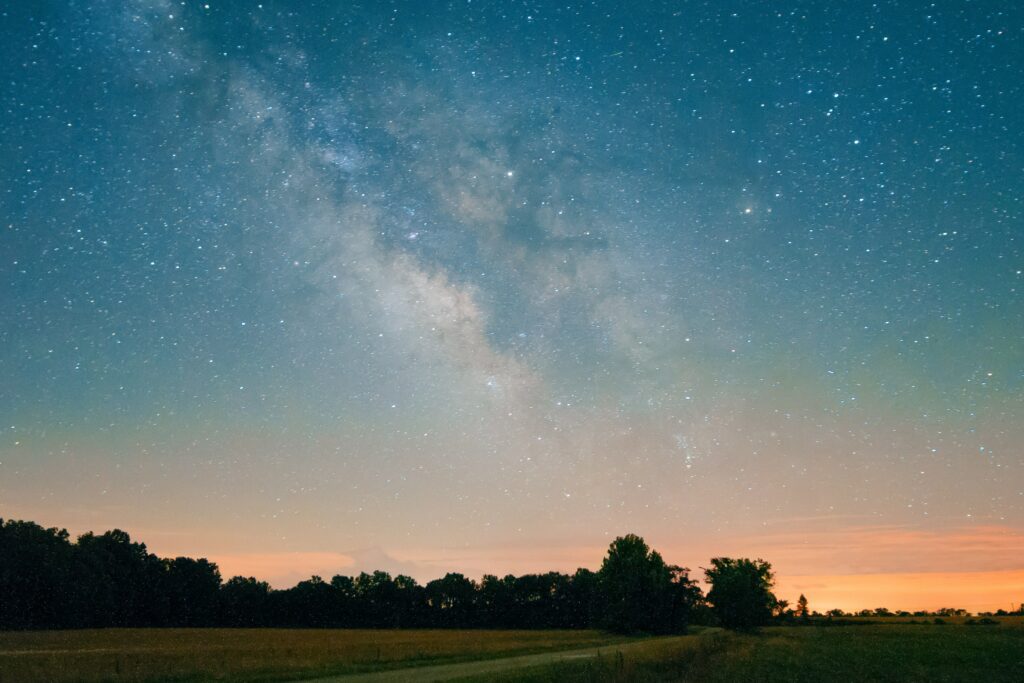 “The word of the Lord came to Abram in a vision…He brought him outside and said, ‘Look toward heaven and count the stars, if you are able to count them.’ Then he said to him, ‘So shall your descendants be.’ And he believed the Lord; and the Lord reckoned it to him as righteousness.” (from Genesis 15)

I always thought Abram was staring up into a dark night sky, dazzled with stars-as-descendants, breathing in cold crisp air as he tried to believe the impossible for a childless man of his age.

Turns out I was wrong.

Read the rest closely. The sun sets later, as the story slips into Act Two of the fateful covenant, as Abram and God seal the deal over a nighttime sacrifice and a burning torch of hope in the darkness. So the day was likely still bright and blazing when an aging Abram was first asked to trust in stars he could not see.

I never realized how the time of day adds a final layer of implausibility to the story: God drags the old man outside into noontime sun, tells him to count all the stars he can see and then trust that he’ll have offspring so many.

Either the cruelest joke or the crucial test of faith: to trust what you cannot see.

Infertility is the foundation of my parenting.

When I’m sinking into a dreadful day of tired tempers and toddler tantrums, when I’m floundering and grasping for air as I spiral downward, infertility is always the solid ground I finally touch with my toes, the reassuring firm beneath my feet from which I pause and push off to rise, to gasp up to the surface again. I remember and right my thinking:

At least I have them. At least we were able to have children. At least they exist.

Any small annoyance is relativized in the face of my babies’ being, the sheer graced gift of their lives. No matter the current crisis, my view is widened to the scope of what matters. My momentary maternal failings become but a blink.

I remember that I have the blessing of a bad day as a mother.

Because it means I mother.

I wonder when these daily, weekly, monthly reminders of the blessedness of bearing children will start to fade. Like the people who live tucked in the foothills of towering mountains or stretched along the edge of the vast sea – I always wonder when they start to take the landscape for granted. Time settles us into the way-it-turned-out as if it were always given. But it is never simply given.

But in the blinding sear of midday, when the sweat runs in rivulets down our back, when our necks crick from craning skyward, it is easier to wave it away, shrug off with a sneer.

It is always easier to walk by sight than faith.

Now the stars are clear as night. Now I start to sense the scope of what I was called to trust when parenthood seemed far from predictable. Now I see the bright sparks against the black sky, the wider span of a greater plan than I could grasp during long months of waiting and wanting and wondering and wallowing.

Did I trust the noontime promise, the prospect of distant lights that would shine brighter when I needed them in deepest dark? Mostly what I remember from our years of infertility is sadness, anger, bargaining with God, weeping with jealousy at others’ good gifts.

But from where I watch tonight, staring out at a winter’s wash of white stars shining through cold darkness, I see clearly. How the wrestling with God, the willingness to trust the divine with my deepest desires, was trust enough for that time. Because it saw me through the heat of day to the calming cool of night.

I wonder what I am called to trust today. What noontime stars am I unable to see, squinting into the sun? What promise of a wider view, a multitude beyond imagining? What prospect so much bigger than my one small life, but of which I am still a part?

I stand at the window watching stars and I marvel at Abram’s trust.

All that he believed he could see at midday.